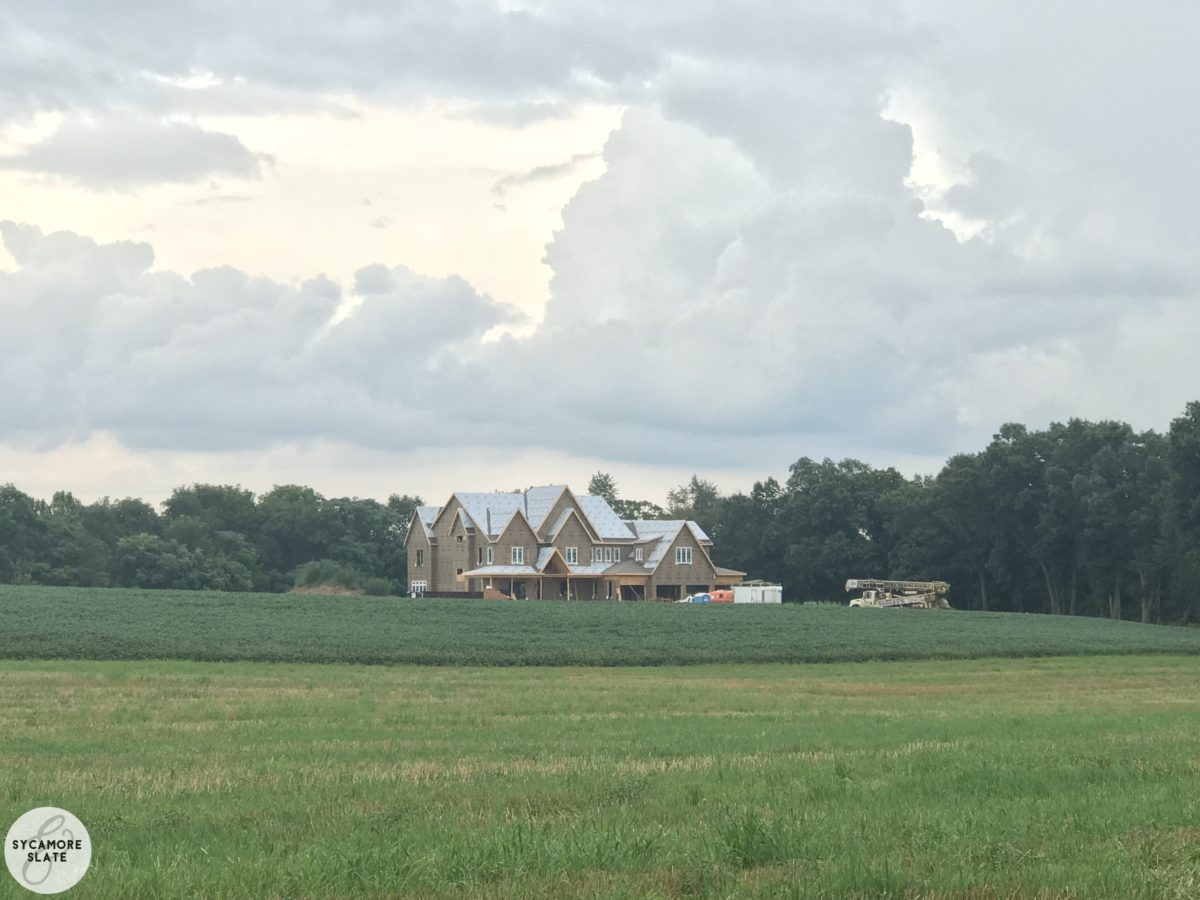 Day 126 (Monday, 8/13/18)    Since we now have the main design completed for the stairs, the guys started to build the landings.  Beyond that, they worked on finishing a lot of the framing that they had been waiting to put up for other projects.  Pictures of the landings tomorrow.

Our builder liked the flowers I set out in one of the windows over the weekend.  The flowers are Zinnias from my garden, the bottle is an old antique that I found on the farm and the white pebbles and water are out of the creek.  It was really fulfilling for me to put together that little display and have something entirely from the farm in the house.

Day 127 (Tuesday, 8/14/18)    A lot more was accomplished in the stairway today.  They finished the lower and middle and got the framing up between the two.  This landing features a doorway to the left side of the house.  Since there are no other doors on this side, I really wanted to include one here so that we’d have easy access to this area of the yard.

A lot was also done outside on the front porch.  We worked out where we wanted the posts to be for certain and they began framing out the porch ceiling last week.  They continued this Monday and Tuesday and ended up with a lot of it up, including the gable over the front door.  I love the extra dimension it adds to the front of the .

They also brought some stone fill in for the garage to even it out and prepare it for concrete in the future.

They also worked on some plumbing today after we had a super long meeting about where all the fixture and cabinets would go.

Day 129 (Thursday, 8/16/18)    I had a really busy day on Wednesday and didn’t get a chance to take any pictures, but they accomplished a lot of “finer detailed” things on Wednesday and Thursday.

They delivered the windows and some doors today.  Here’s a few of them hanging out in the garage, waiting to be installed:

You can see below that they have the windows all cut out now and have prepared some of them for window installation with flashing material (the white stuff on the bottom corners of the windows).

They also finished the  portion of the stair tower, which is visible in the picture below.

Day 130 (Friday, 8/17/18)    Several windows and doors were installed today.  It amazes me how much more-finished they make the house feel.  It’s getting very close to being “water-tight” so-to-speak.  Here are the indoor pictures of the windows:

Here is the house from the outside, with some of the windows in.  They also finished the roof on the garage.

Thanks for reading about our progress this week! Keep checking the Home Building page upcoming progress or to get caught up on what we’ve accomplished so far!