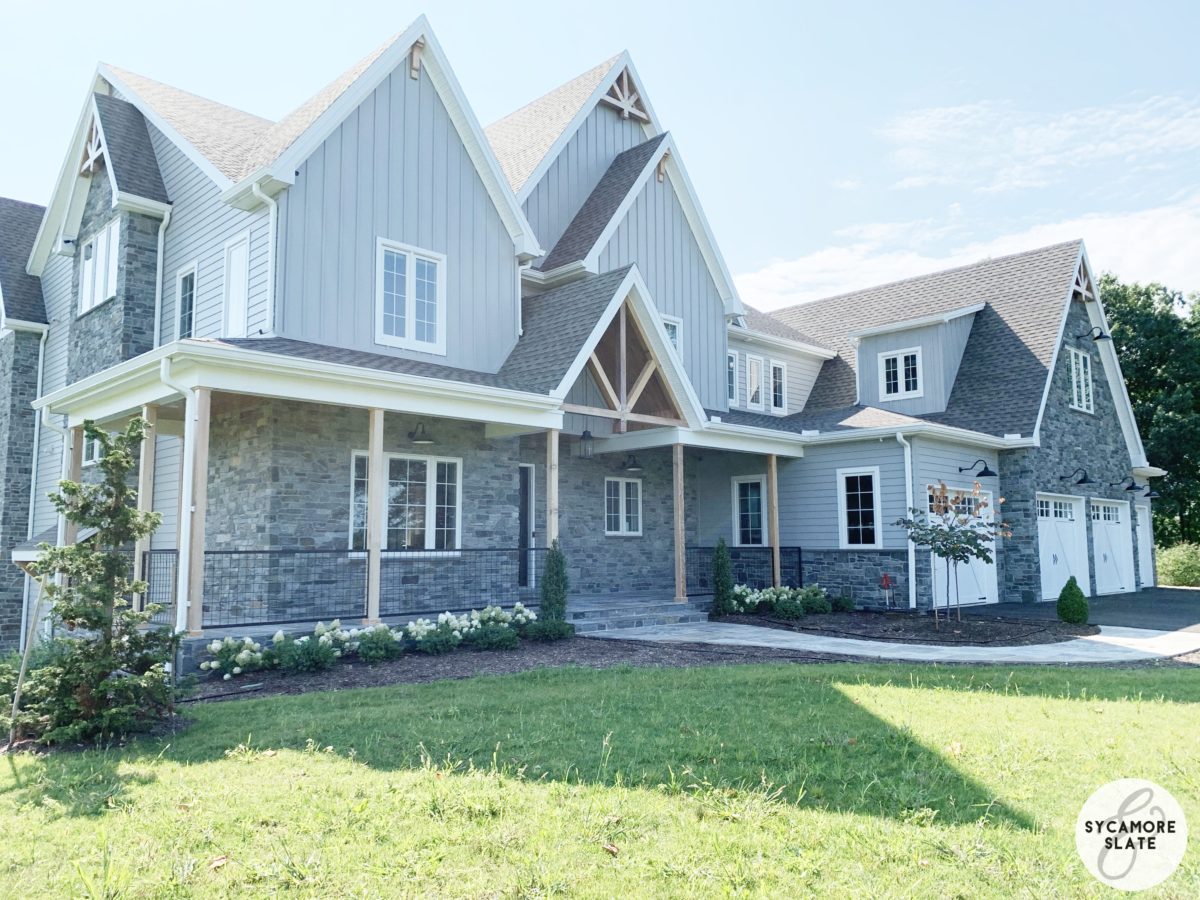 We’re smack dab in the middle of summer, with (hopefully) the hottest part behind us. First thing in the spring, we got our yard planted and the irrigation system all hooked up and figured out and were able to get a jump start on landscaping!

After the grass was pretty well established, my goal for the rest of spring was to get a lot of our foundation plantings in. Starting with trees since they are have the biggest impact. In total, we put in 6 in the front yard.

Farthest from the house, across the lane, we planted 3 heritage river birches (shown above) and a bald cypress (below).

In the front beds next to the house, we put in 2 trees. The first is a Forest Pansy Redbud, which is in the inside of the curved sidewalk area. This one is actually going to get relocated come fall and replaced with another Forest Pansy Redbud. The topmost section of the tree got torn off in a severe storm this summer, so we’re going to move it somewhere less conspicuous and pick out a new, fuller tree for the front of the house.

The second tree is an Iseli Green Hinoki Cypress, which we put right at the corner of the house. You can see it in the picture above. I really wanted to make sure I had at least one large evergreen out front for interest when all the deciduous trees loose their leaves over winter. Eventually, I hope to plant a few more around as well.

We also added three other trees around the house. A Cherokee Chief Dogwood on the left side near the stair tower:

A Skyline Honey Locust in the back near the patio:

And a Japanese Maple on the right side beside the garage:

I have plans and places already picked out for at least three additional trees, which we’ll be planting in the fall. Since summer is in full swing now, it’ll be less shocking to the trees if we wait until it cools down before we try to put them in.

After the trees, I worked on shrubs. I did a layer of Bobo hydrangeas in front of the front porch and a row of Vardar Valley boxwoods in front of those, which will eventually grow together to form a hedge.

My inspiration for this look came from these beautiful lanscapes:

There are also two Dee Runk boxwoods that flank the walkway to the front door. On the driveway end of that same walkway, we put in two Green Mountain boxwoods. We put in a giant rock in a bed near the driveway last fall, and I have a Vanilla Strawberry Hydrangea there, as well as two Snowbelle mock oranges. These might just be my favorite flowering shrubs of all time. They’re so pretty when in bloom, and the smell is just amazing.

We have 5 more Dee Runk Boxwoods in front of the highest retaining wall on the backside of the house, and I have two Strawberry Sundae Hydrangeas in front of those, which will get very large eventually. There are more hydrangeas in that bed as well, but I might move some of them around in the fall.

Chad also got some of our hardscaping done, with rock paver paths through some of the beds.

If you’re wondering about the pipes in the beds, that is the drip irrigation system we’re using for watering. It’s working SO well and it’s so nice not to have to worry about watering anything each day when it’s super hot out. Eventually these lines will get buried but for now, we’re leaving them on top of the mulch because we’re still going to be putting in a lot of plants in the fall and don’t want to have to dig it up only to bury it all over again.

We’ve also gotten a little more done this year on the inside of the house, and I’ll try to post about some of that stuff soon! Thanks for reading! Hope you’re having a spectacular summer!