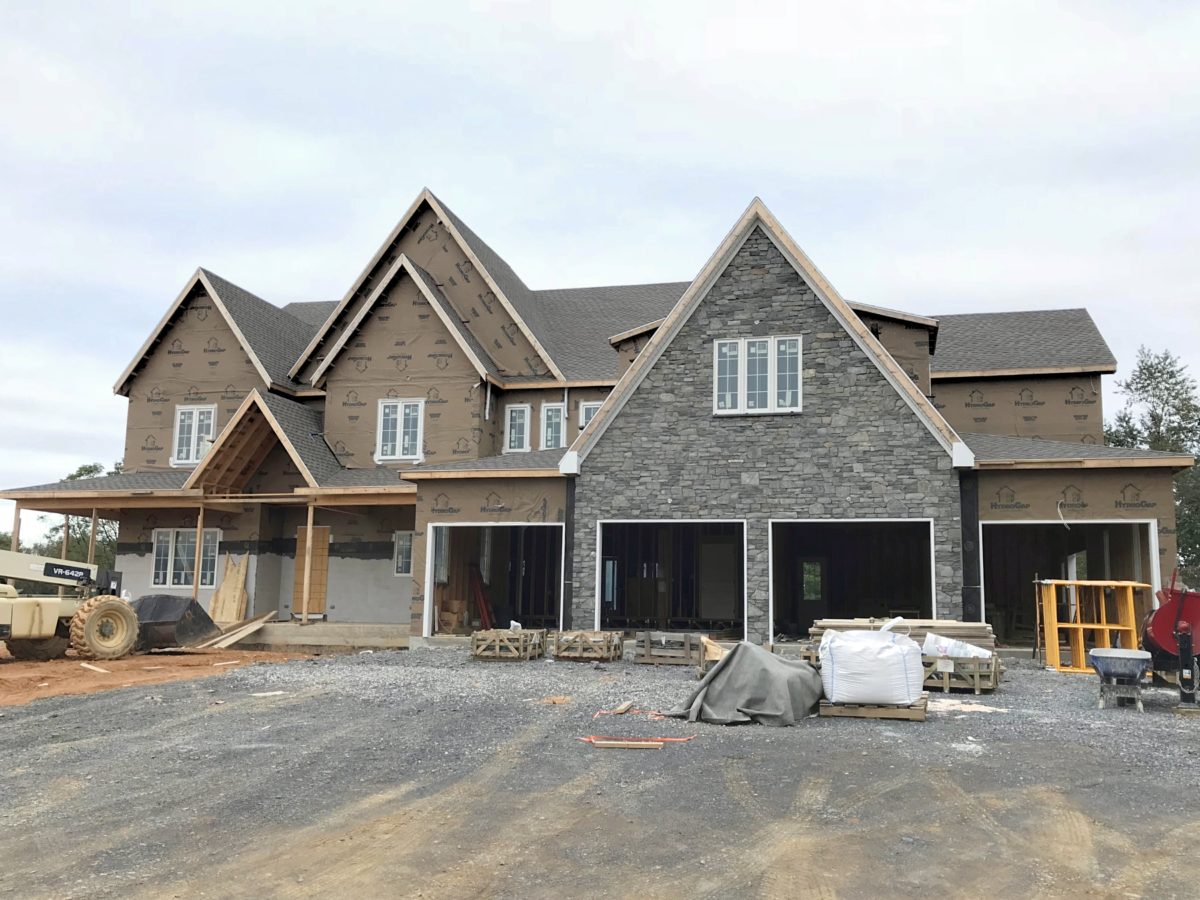 I can’t believe how quickly time seems to be moving right now!  Three more weeks have passed since my last update on our house progress, and I can’t even believe it’s been that long!  Everyday the house is full of people working, but – same as I said in my last post – so much of what is happening is “small stuff” and “under the hood stuff” and “wow, that’s really boring stuff”.

In order to spare you every little detail of the housework, I waited a few weeks so I’d have more of the “interesting stuff” to share with you.  So here is September 17th thru October 7 all rolled up into one easy-to-find update!

Most noticeably, the roofers put on our shingles! So we now have a (mostly) watertight house.

They’ve been continuing the stonework on the outside of the house when they can.  This has been the wettest summer anyone can remember and it’s rained every single week which makes it really difficult for the masons to hang stone.

Around the back of the house, they built the decks on the first floor and off the master bedroom.  We’re really pleased with the composite decking we chose! It does a really good job of matching the color of the cedar we’re using for our deck posts and other pediments outside.

Inside the house, most of the work has been the continuation of HVAC, electrical, and plumbing.

Downstairs in the basement, they framed in our raised landings in the theater:

The two upper windows in the great room were installed.  We love the added light were getting now as well as the view!

Our stairs are also completed and sitting in our dining room.  They’re waiting to install them until the last of the heavy equipment is in place to minimize accidental damage to the steps.

Upstairs, they’ve done a lot of odds and ends, but the one that excites me the most is the decking they built for my bathtub!

That’s it for the “big stuff” the past three weeks!  Lots and lots of little stuff like small walls being framed in, and lots of meetings about where everything will be – wall lights, ceiling lights, light switches, fans, cabinets, appliances, thermostats, outlets, faucets, and it feels like a million other things.  It’s so fun to plan this stuff, but also really hard!  You have to stand there and try to imagine exactly how you’ll use each room to figure out where each and every little detail should go.

Well, thank you for checking out this house update!  You can see all our progress so far on the Building Progress page.  Sign up below to receive updates when I add new posts!  Now I’m off to another meeting at the house with the cabinet maker! Gotta get me some office built-ins!  Have a great week!