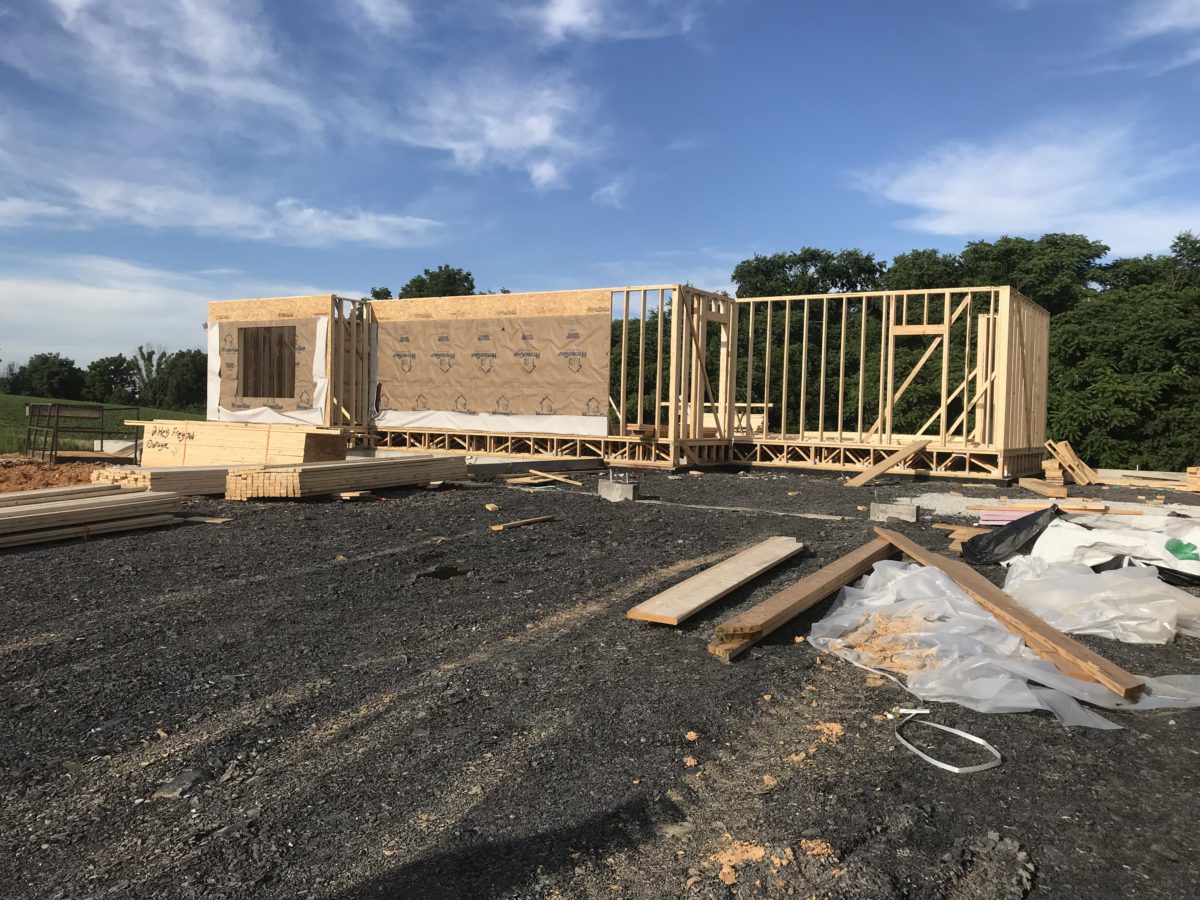 Day 70 (Monday, 06/18/18): They were able to finish all the floor trusses on the basement ceiling today, which looked so cool.  It’s really starting to feel like we have legit rooms now. 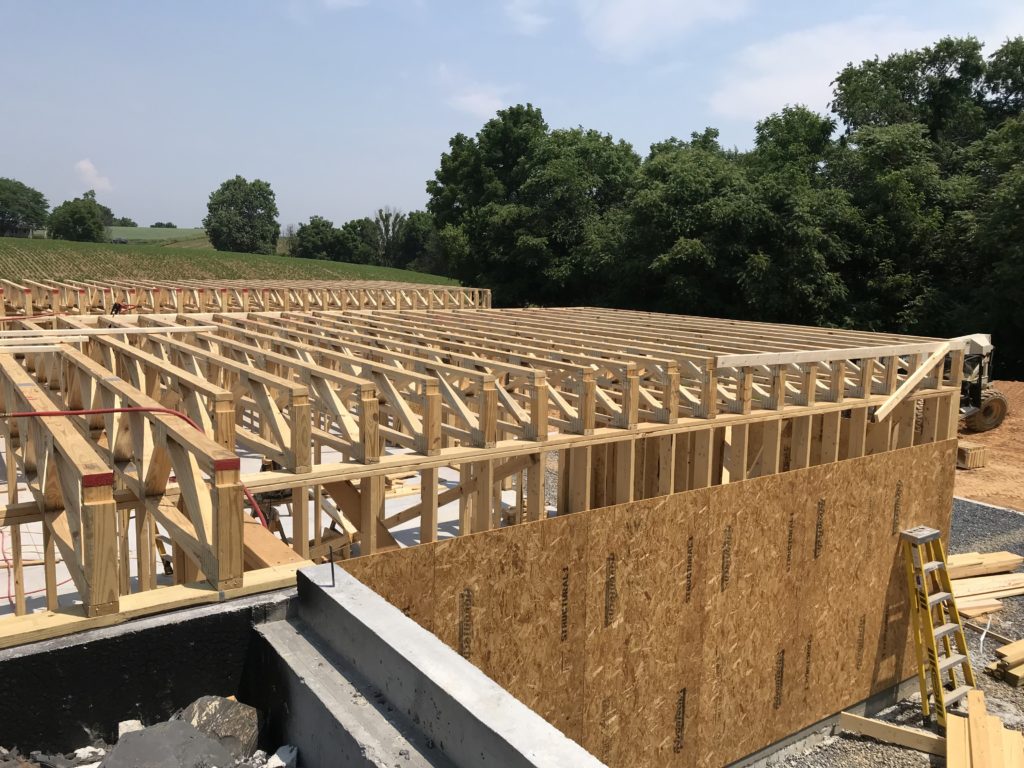 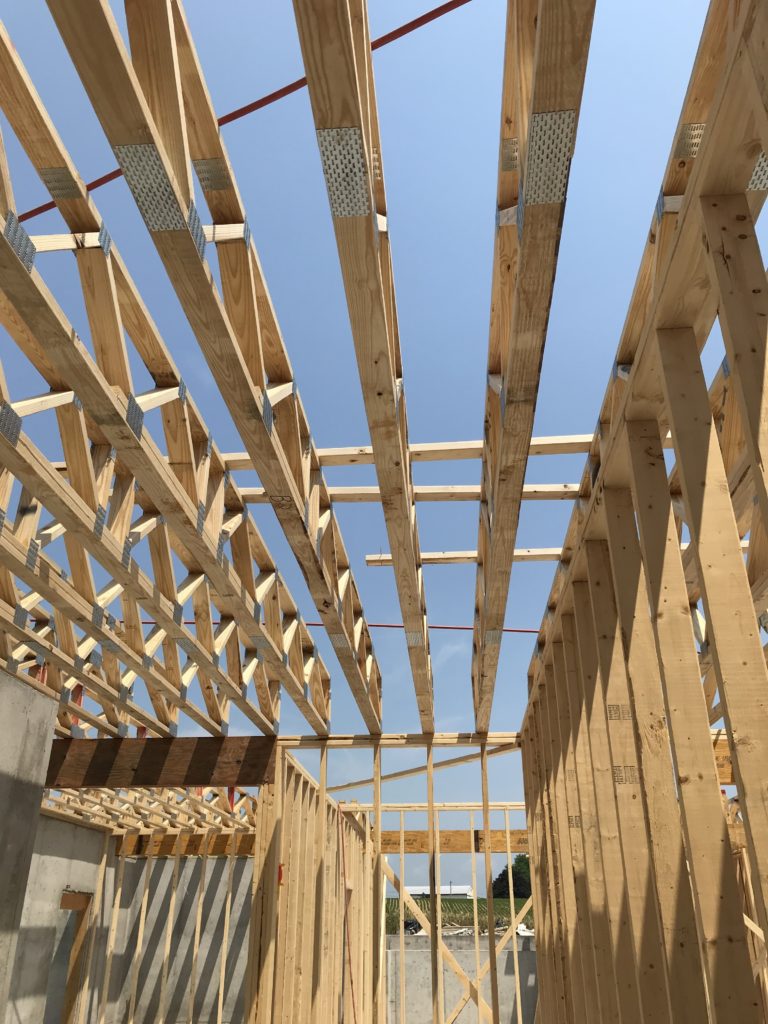 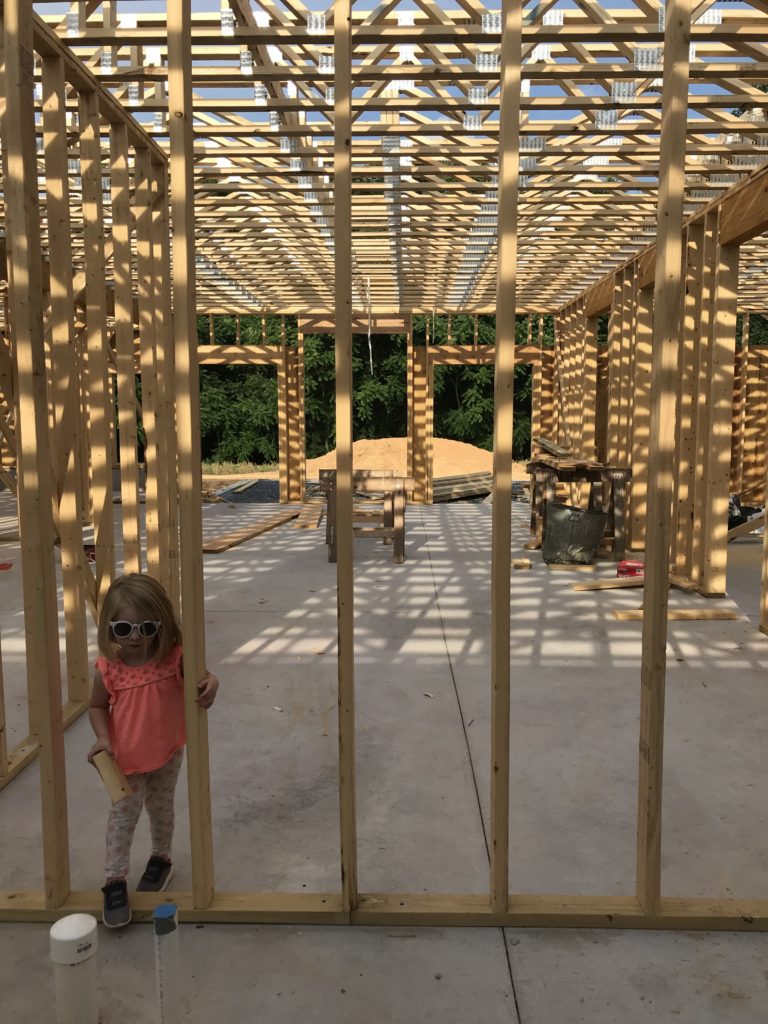 Over the weekend, Chad and I found the first few (of what I assume will be many) uh-ohs.

The drain in the basement bathroom for the toilet is off-center AND is several inches too far forward from the wall, which will require them to build another small wall out a few inches from the original back wall.  Since the drain is concreted into the floor, we can’t change it, so I decided to “fix” it by adding 6-inch-deep built-in shelves along one wall in order to make the drain appear centered.  We’ll also add built-ins behind the toilet since we now have a few inches of dead space behind the toilet anyway.  Overall, it’s an easy and pretty painless fix and we’ll have tons of storage in that bathroom.

The other snafu was that the person who formed our door into the cold cellar area under our porch was off on their measurements by a few feet.  The door was supposed to line up with another door in the mechanical room and it definitely does not as you can see in the picture below.  It looks and feels little awkward, but at least the mistake will be entirely tucked away in the mechanical area.  There’s really nothing we can do to fix this mistake since concrete was literally poured around the door.  Just going have to live with it.  Whomp-whomp. 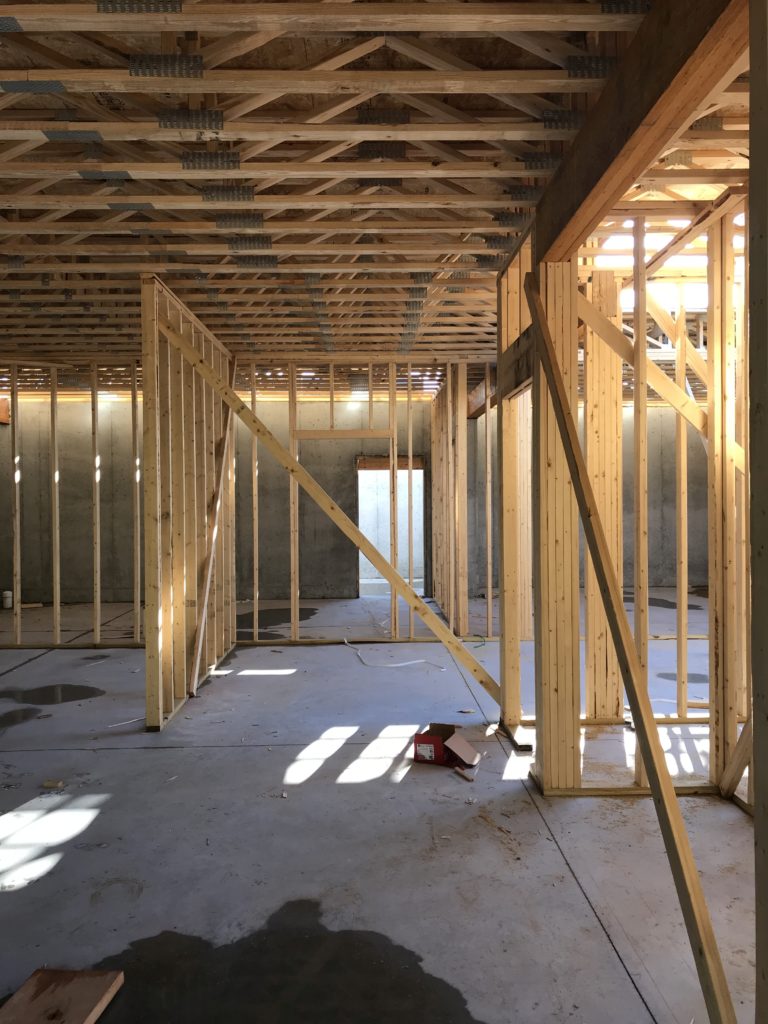 Day 71 (Tuesday, 06/19/18):  Bit of a major downer was discovered today.  This was a sort of “we’re all to blame” situation.  Last night, Chad and I went to the house to take a good long look at it all and we started wondering about the ceiling trusses and how they were laid out and how they were going to fit the ductwork up inside them, which had been the plan.  We talked to the builder and it turns out that, while he had told the truss manufacturer to design around ductwork, the message never got into the official work order.  So basically, it all got lost in translation and our floor trusses were not built to accommodate ductwork.  And this wasn’t noticed by anyone until last night.

This potentially means that instead of having as high of ceilings in the basement as we expected, we may have to lower them nearly a foot to hide all the ducting.  Or we may have to have bulkheads in several places around the basement.  Both of the options, I really really do not want.  So I did a lot of research today about other options and we’re waiting on a call back from our HVAC guy to talk us through some of these new ideas.

One possibility is a pressurized system, which has its own set of pros and cons.  The big pro here is that it uses these really narrow, flexible tubes that will fit up into our floor trusses without any problem.  The big con is that we expect it’s more money and probably not quite as efficient a heating/cooling system.

Another thought I had was, is it possible instead of having one or two large main ductwork “trunks” feeding air to the basement and first floor, to split it into perhaps four-five smaller trunks that would allow us to use smaller ductwork that we could fit into the ceiling trusses?  Our builder thought perhaps yes, but again, we really need to talk to the HVAC guy about it.

As far as housework goes, the team put plywood on top of the floor trusses, and we can now walk out onto our first floor (very carefully since there are no walls).  We had about a half-hour of heavy rain right around noon, but it didn’t slow work down too badly. 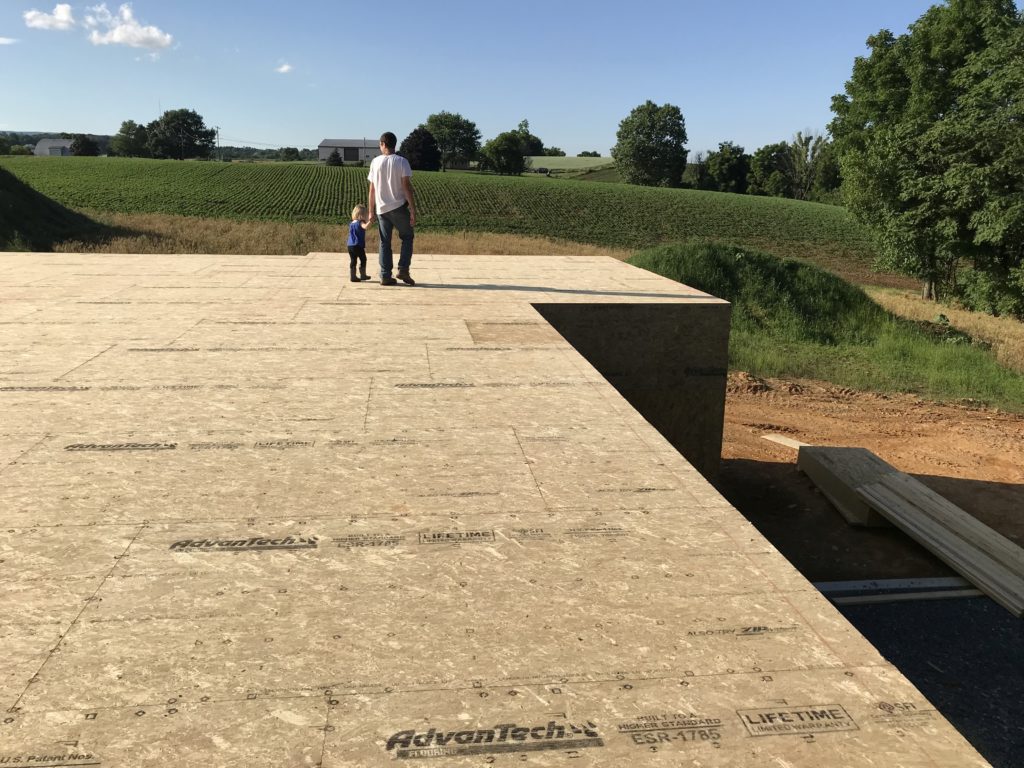 Really hoping tomorrow is a better day with some answers to our HVAC issues.

Day 72 (Wednesday 06/20/18): The team worked in the morning, putting house wrap on the basement story.  They also got a small start on the first floor before the rain started around lunchtime.  The rest of the day was rainy and very wet so it was a half-day. 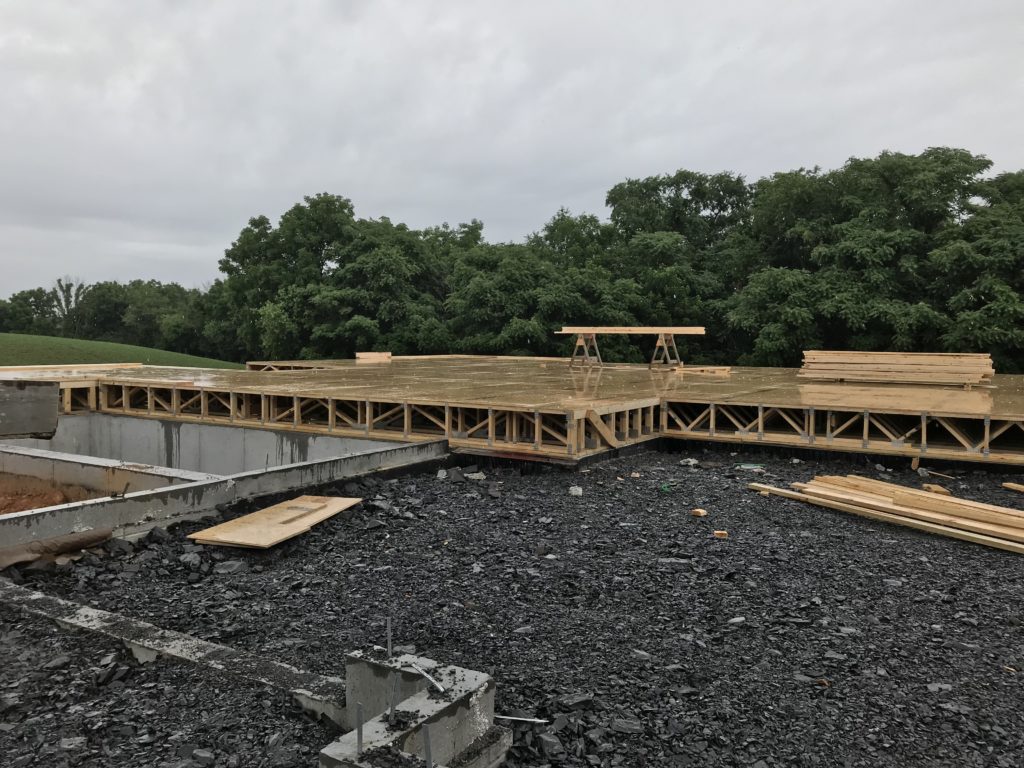 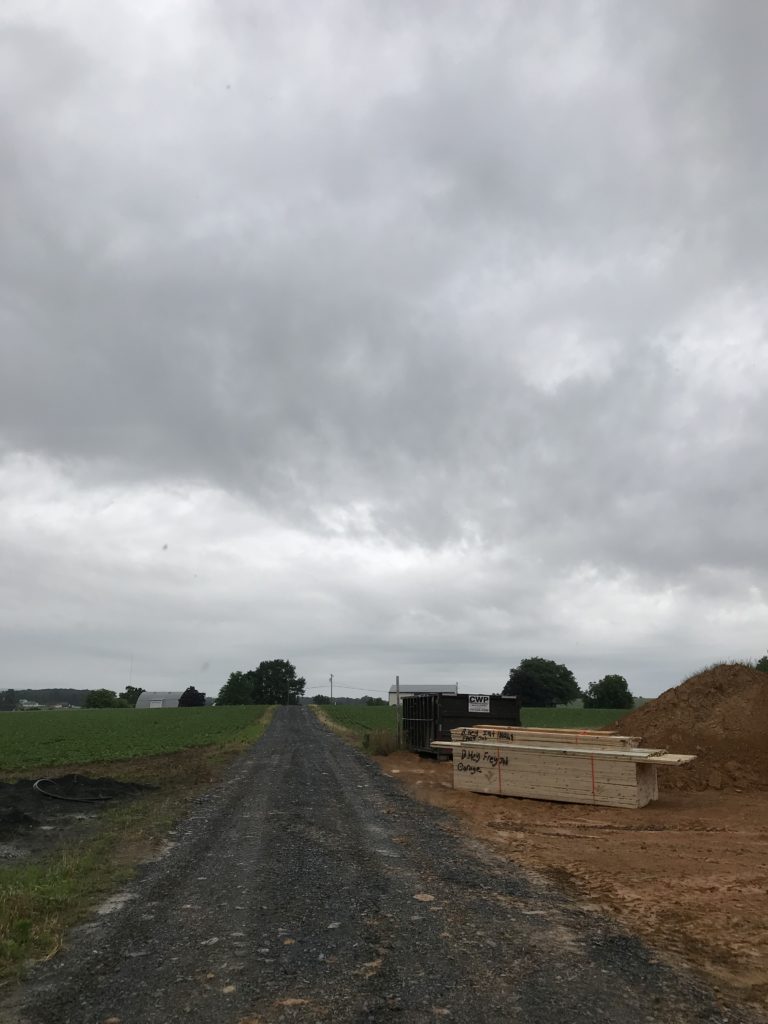 Day 73 (Thursday 06/21/28): Quite a few exterior walls on the first floor went up today.  Very cool to see out the “windows” and get to imagine how living here will feel.  Today was one of those days where I spent a lot of time feeling humbled and overwhelmed with God’s grace and mercy. 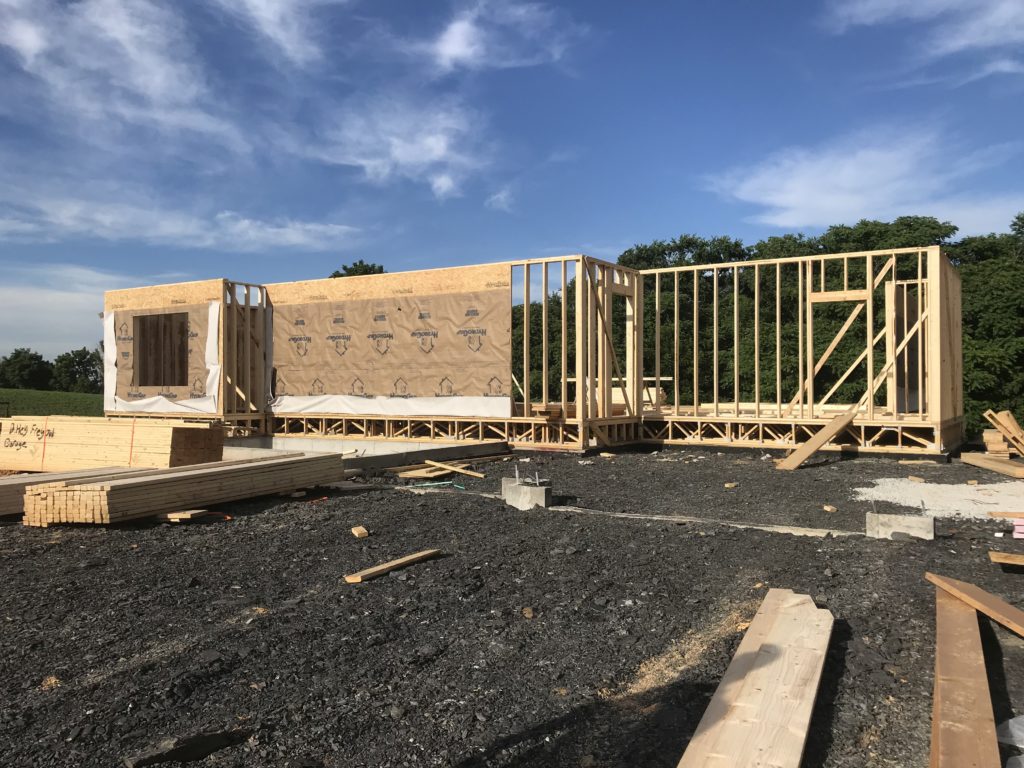 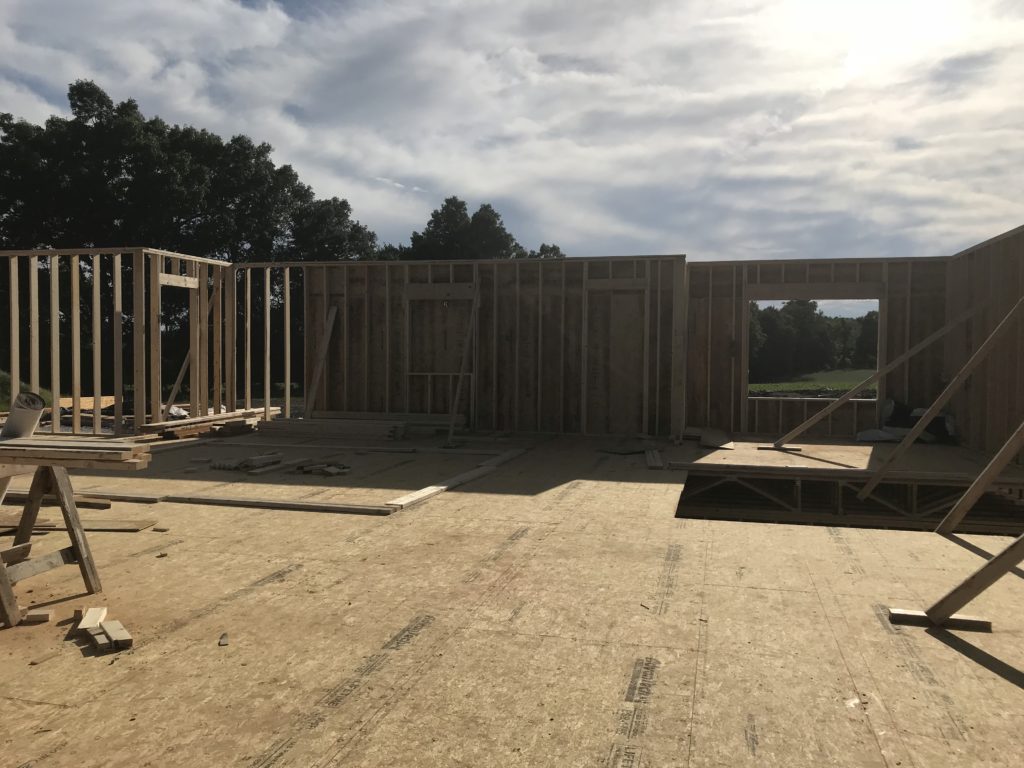 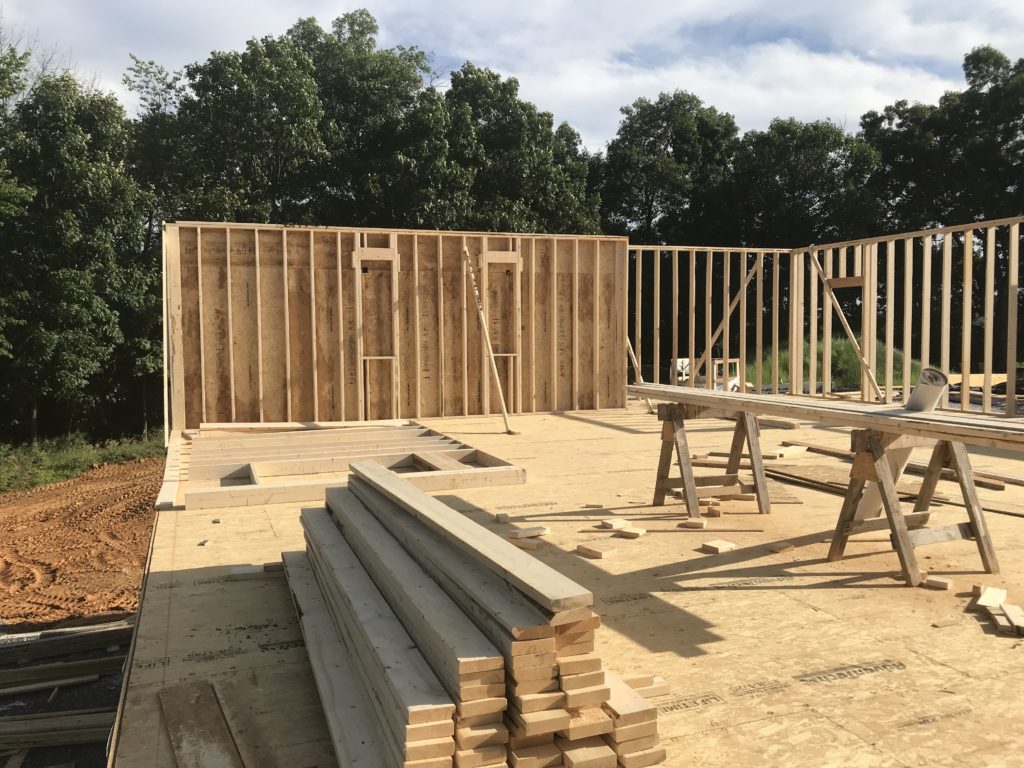 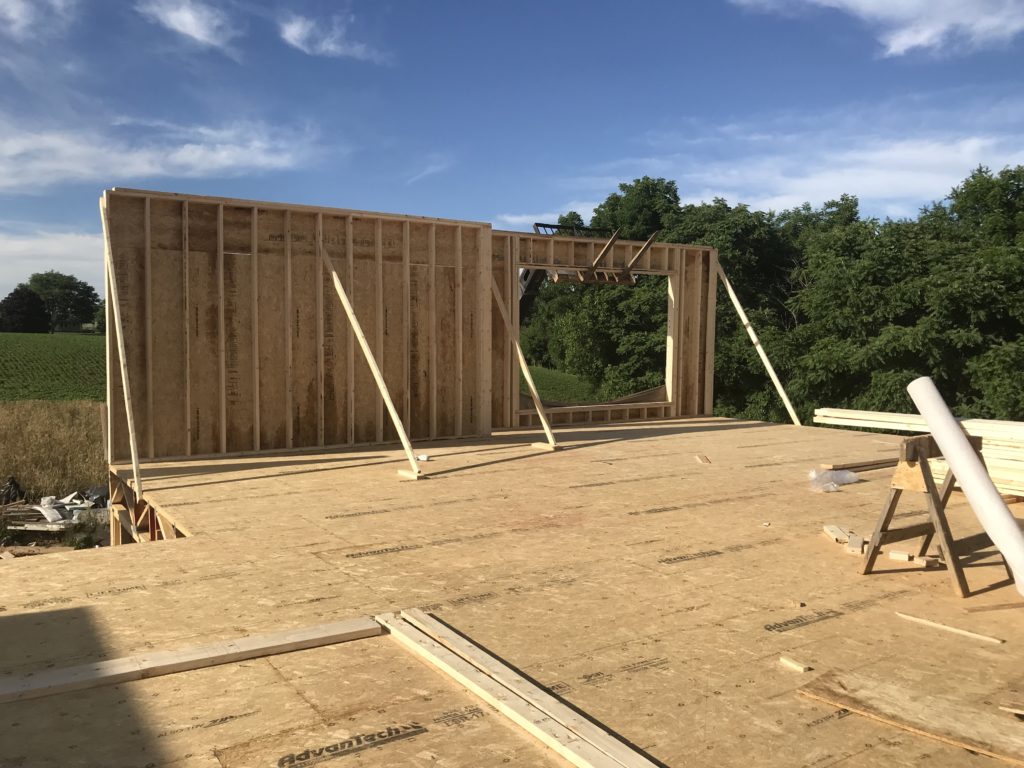 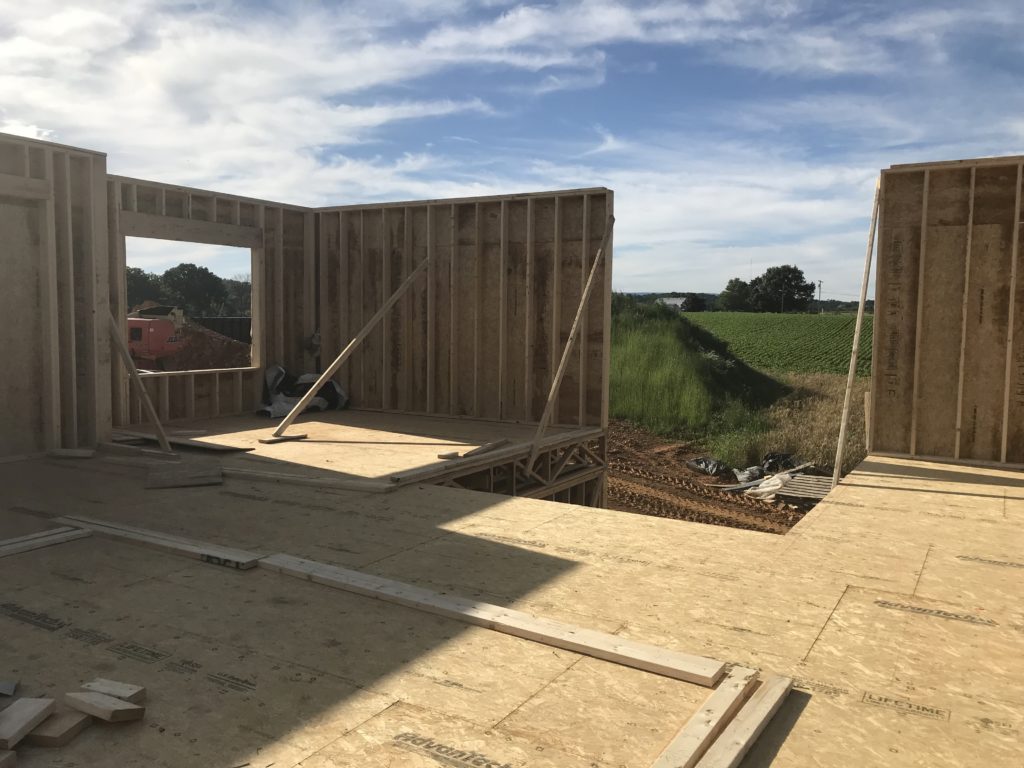